We are Legion (We are Bob) Bobiverse Book 1

by Greg
in Book Review
0

I generally dislike cheesy Science Fiction. I didn’t care for Hitchhikers Guide to the Galaxy, Starship Troopers, or Battlefield Earth.  I’m talking about movies.  I understand people say they are some of the best Science Fiction books ever written. It’s too bad the movies ruined them for me.  I bring them up to give you an example of the types of books and movies I avoid. If there is a narrator, I’m out.

What does this have to do with We are Legion? Primarily the series name inferred parody or slapstick humor. The books continuously displayed in my kindles “recommended for you” section and I scrolled past them every time.  I thought Bobiverse, really? No way I’m buying these books.

Then I started seeing the Bobiverse books showing up on other sites top lists. People were putting the Bobiverse series up in the same league as Altered Carbon, Wool, and The Martian. Here is an example. I was finally convinced and decided to pick up the series. 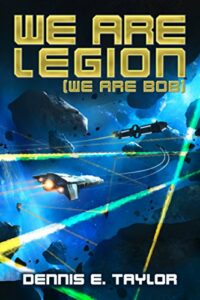 We are Legion was written by Dennis E. Taylor and originally published in 2016 and is the first book in the Bobiverse Trilogy. Bob, a software engineer from San Diego, had just sold his company and was back in Las Vegas to attend a Science Fiction convention and celebrate the sale of his company.

While in Las Vegas Bob decides to sign up to be frozen in the event of his death. The goal is to be revived in the far future when a new body can be grown. Since he is a Sci-Fi fan and not religious he figures its better than being buried.

Without giving too much of the story away Bob does indeed wake up in the future. Many things have changed and he learns he is being forced to perform as an artificial intelligence, referred to as a replicant, of a deep space probe. The probe he is loaded into is a Von Neumann probe. A Von Neumann probe is a probe which has all the facilities and technologies onboard to replicate. Check out this Wiki for more info.

The Antagonist of this book is mostly a Brazillian replicant named Major Ernesto Medeiros. In the future, the Brazilians were world leaders and adversaries of the government that launched Bob.

As Bob moves through the universe and solves problems he must replicate himself, tag habitable planets, and build space stations for the arriving colonists. As Bob replicates himself he finds that his clones are a little bit different. This is where the story gets very interesting.

Each chapter of the book is written from the perspective of Bob or a Bob clone. Taylor does an amazing job of creating an individual personality for each Bob clone which is still Bob but with just enough difference that they separate characters. While reading this book I formed connections and got to know the different Bobs enough to anticipated how each would react to a situation. Character building on a different level than I have ever read. To put it in perspective, imagine reading Ringworld where all the characters were Teela Brown clones.

There is also a deep emotional component to this book which brought me close to tears several times. How the Bob’s deal with immortality, humanity, and identity is deep and believable.

This book was truly a pleasure to read.

If you prefer to buy off eBay: https://greg.reviews/bobebay

The Author’s page is here: https://greg.reviews/DennisETaylor

Thanks for reading the Review!

**As an Amazon Associate I earn from qualifying purchases**
**When you click on links to various merchants on this site and make a purchase, this can result in this site earning a commission. Affiliate programs and affiliations include, but are not limited to, the eBay Partner Network**

10 Sci-fi Books to Read During Quarantine